Our cats are in their twilight years and they are suffering arthritis and all the others problems of old age. Vet visits are getting more frequent as we want to make sure they can enjoy the remainder of their lives as much as possible and with as little pain as possible.

At a recent visit the vet asked us to start giving the cats some olive oil every day, in this case to help their gut. Alan was already taking a spoonful every day, so it prompted us write about it. Hopefully you will read on and maybe it can help you. 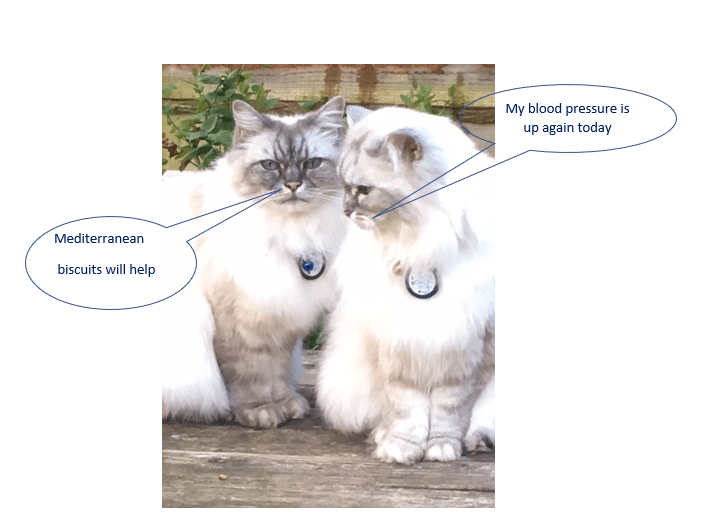 Olive oil is extracted from olives and consists of both saturated fat and polyunsaturated fat. The main fatty acid is oleic acid, making up about three quarters of the oil volume.

Most of us will have heard about the benefits of the Mediterranean diet rich in olive oil and its healing properties. Large scale studies have supported this view. For example a study of 841,000 people found that olive oil was the only monounsaturated fat associated with a reduced risk of stroke and heart disease. In another review with 140,000 participants, those who had olive oil were at much lower risk of stroke than those who didn’t.

Studies suggest that this oleic acid reduces inflammation, notably in C-Reactive Protein, an important inflammatory marker. Oleic acid contains vitamins E and K and biologically active anti-aging antioxidants. Chronic inflammation is thought to be a leading driver of many diseases, including heart disease from high cholesterol, stroke, arthritis, cancer, type 2 diabetes, obesity, rheumatoid arthritis and Alzheimer’s. Such problems led to extensive research on the role of olive oil in the Mediterranean diet.

Several studies have linked olive oil to beneficial effects on blood sugar, insulin sensitivity and type 2 diabetes. A randomised clinical study of 418 healthy people recently confirmed the protective effects of olive oil, where a Mediterranean diet rich in olive oil reduced the risk of diabetes by over 40%.

Alzheimer’s disease is a common neurodegenerative condition which leads to the build up of so called beta-amyloid plaques inside the brain cells. One study on mice showed that olive oil can remove these plaques.

Mediterranean countries with olive oil rich diets have a lower risk of some cancers and many researchers believe olive oil may be the reason, but there has been no concrete research as yet to support this. The anti-oxidants in olive oil can reduce oxidative damage due to free radicals, which is believed to be a leading driver of cancer. Many test tube studies have demonstrated that compounds in olive oil can attack cancer cells.

One study of people with Rheumatoid Arthritis, in which olive oil was combined with fish oil, showed a significant improvement in hand strength, joint pain and morning stiffness.

A harmful bacterium Helicobacter Pylori lives in your stomach and can cause both stomach ulcers and stomach cancer. Test tube studies have shown that extra virgin olive oil fights eight strains of this bacterium, three of which are resistant to antibiotics. A study showed that 30 grams of extra virgin olive oil taken daily, can eliminate Helicobacter Pylori infection in 10% to 40% of people in as little as two weeks.

We have a big fight on our hands to reduce inflammation in COVID victims. Natural remedies such as olive oil might have a role to play.

There have been far too many examples that show some form of benefit to ignore in taking olive oil every day.  It’s not some form of miracle cure, no such thing exists. But the smart money would be to add it to your daily diet.

References are available on request for those who wish to delve deeper.