Do you have an extremely painful, swollen elbow that you cannot move, or some deformity? If so, you may have a dislocated elbow.

A dislocated elbow occurs usually as a result of a fall or a direct blow, and often involves fractures of the ulna radius and humerus. The most common reason involves falling onto an outstretched hand, with the arm away from the body, and the elbow being forcibly flexed on contact (and usually also with a twisting movement). This results in a posterior dislocation that accounts for up to 90% of all elbow dislocations. In a posterior dislocation, the ulna or the radius (or both) moves backwards and ligament damage will occur. If relocation is not instant, a medic will reduce it and check out the nerves and blood vessels.

Diagnosis is by medical emergency, physiotherapy assessment, and X-ray, and treatment can include: a reduction of the dislocation, sling immobilisation for one to three weeks, and painkillers. Later on you can add gentle mobility exercises, then once movement is back, strengthening, ultrasound, and pulsed shortwave to help the ligament damage.

Are normal daily activities painful? Is your elbow becoming stiff, swollen, and losing its range of movement? Is it hard to completely straighten your arm, then is it hard to bend?

Do you have elbow pain and a boggy feeling, with a red localised swelling? Do you have limited movement, and pain at rest or upon exertion?

If so, you may have one of the following conditions: 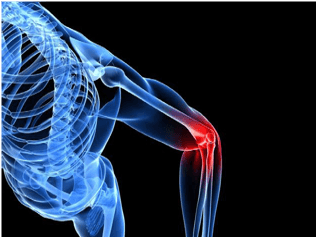 Student’s elbow – or olecranon bursitis – is the inflammation/swelling of the bursa that protects the bone at the back of the elbow. Traumatic or repetitive impacts to this area can result in pain and a large swelling at the back of the joint. The bursa is a sack of fluid that helps to prevent friction between bones and the soft tissue over the top of the elbow. Inflammation or bleeding into a bursa can cause it to become very sore, and this can happen by being hit by someone (or a ball, for instance), or a repetitive action.

Treatment can include: RICE (rest, ice, compression, and elevation), physiotherapy, sports therapy, and wearing a sling. Advice includes not leaning on the elbow, wearing an elbow guard if playing cricket or contact sports, and initially immobilising

the arm. You may need a sac of fluid called a bursa syringed out (aspirated) and a corticosteroid injection.

Tendinosis of the com-mon extensor tendon (tennis elbow) is a com-mon cause of elbow pain for adults. Symptoms can include an ache/pain and stiffness to the local area of the tendon at the el-bow, or, when severe, a burning that surrounds the whole joint around the affected tendon. The pain is usually worse during and after activity, and the next day it will be stiffer as swelling impinges on the movement of the tendon. Repetitive typing, sport, or stressful situations in life can tie in with the onset of the pain. Swelling in a region of micro-damage or partial tear may be detected visually or by touch. 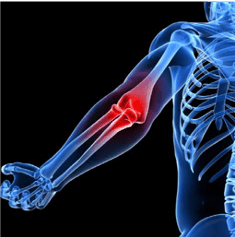 Tennis elbow tendinosis is due to tendon overuse and the failed healing of the tendon. In

addition, the extensor carpi radialis brevis muscle (which extends the elbow) plays a key role. Tennis elbow or lateral epicondylitis is a condition in which the outer part of the elbow becomes sore and tender, and the forearm muscles and tendons become damaged from overuse – repeating the same strenuous motions. This leads to pain and tenderness on the outside of the elbow.

Any activity (including tennis) that involves the repetitive use of the extensor muscles of the forearm can cause acute or chronic tendonitis of the insertion of these muscles at the lateral epicondyle of the elbow. The condition is common in carpenters and labourers who swing a hammer/tool with their forearm.

Golfer’s elbow – or medial epicondylitis – is tendinosis of the medial epicondyle of the elbow, and is in some ways similar to tennis elbow. The anterior forearm contains several muscles that are involved with flexing the digits of the hand, as well as flexing and pronating the wrist. The tendons of these muscles come together in a common tendinous sheath, which originates from the medial epicondyle of the humerus at the elbow joint. In response to minor injury – or simply for no obvious reason – this point of insertion becomes inflamed.

Before anaesthetics and steroids are used, physiotherapy treatment after rest, ice, compression, and elevation (RICE) will typically be used. This will help to decrease inflammation, and rest will help the overuse injury. The patient can use an elbow brace or splint for compression, the splint being made in 30-45 degrees of the elbow bend. A simple daytime elbow brace may also be a useful alternative.

Exercise prescription is for muscle/tendon reconditioning, starting with stretching and the gradual strengthening of the flexor-pronator muscles. Strengthening will slowly begin with isometrics (static contractions) and will then progress to eccentric exercises (working into stretching with loading), helping to get a range of motion back to where it once was. Simple analgesic medication has a place in the beginning, as do oral anti-inflammatory meds (NSAIDs) – these will help to control pain due to inflammation. A more invasive treatment is the injection, which causes an initial exacerbation of symptoms lasting from 24 to 48 hours.

An injured tendon is very slow to heal; partial tears heal by the rapid healing response of type-III collagen, which is weaker than normal tendon. Recurrence of the injury in the damaged region of the tendon is common. Rehabilitation, rest, and a gradual return to the activity is sensible.

There is evidence to suggest that tendinosis is not an inflammatory disorder. Therefore, anti-inflammatory drugs are not an effective treatment, and inflammation is not the cause of this type of tendon dysfunction. Initial recovery is said to be within two to three months, with full recovery usually within three to six months. Most people (80%) will fully recover within 12 months, depending on treatment effectiveness. If therapy doesn’t work, you can then move onto surgery, consisting of the excision of the abnormal tissue. The time required to recover fully from surgery is about four to six months. Delaying exercise until after the initial inflammatory stage of repair could promote tissue repair and remodelling.

Dr Cameron, a delightful Scottish doctor, explained this procedure to me: this is when your own blood is injected back into you. For example, a tenocyte injection could be used for the treatment of severe, chronic, resistant tennis elbow (lateral epicondylitis). A needle biopsy could be taken from the patellar (knee cap) tendon, and the extracted tendon cells expanded by in vitro culture. The tenocytes could then be injected into the injured tendinopathy site – the origin of the extensor carpi radialis brevis (extensor) tendon – under the guidance of an ultrasound. After this little-known treatment, it has been stated that patients showed improved clinical function and structural repair at the origin of the common extensor tendon.

Augmented Soft Tissue Mobilization (ASTM) is a form of manual therapy that has been shown in studies on rats to speed the healing of tendons by increasing fibroblast activity (cells that rebuild connective tissue).

The use of an inflatable brace (AirHeel) was shown to be as effective as eccentric loading in the treatment of chronic Achilles tendinopathy. Both modalities produced significant reduction in pain scores, but their combi-nation was no more effective than either treatment alone.

I use this. Research agrees that shockwave therapy (SWT) is effective in treating calcific tendinosis. In rat subjects, SWT increased the levels of healing hormones and proteins leading to increased cell proliferation and tissue regeneration in tendons.

The future of non-surgical care for tendinosis is bioengineering, as ligament reconstruction is possible using mesenchymal stem cells and a silk scaffold. These stem cells are capable of seeding the repair of damaged tendons, and autologous tenocyte implantation is currently being tested for tendinosis.

Scientists have found that miR-29a – a single microRNA – through its interaction with a protein (interleukin 33) plays a key role in regulating the production of collagens in tendon disease. A loss of miR-29a from human tendons increases collagen type-3 production, a key feature of tendon disease. The replacement of miR-29a in the damaged tendon cells in the lab then restores collagen production to pre-injury levels. A trial will put injections of microRNA – small molecules that help regulate gene expression – into the tendon in order to decrease the production of type 3 collagen and switch to type-1.

Researchers have tried to analyse the effect of treatment on tendons, and tendon tissue strain and its mechanical properties can be looked at by using elastography (an acoustical imaging technique that measures strain distributions in tissues from stress or compression). Strain is inversely related to stiffness, so under stress, tissue that displays less strain is assumed to be stiffer than tissue that exhibits more strain. Elastography, therefore, is an indirect method to estimate tissue stiffness. Acoustoelastography is another ultrasound technique, one that relates ultrasonic wave amplitude changes to the mechanical properties of a tendon